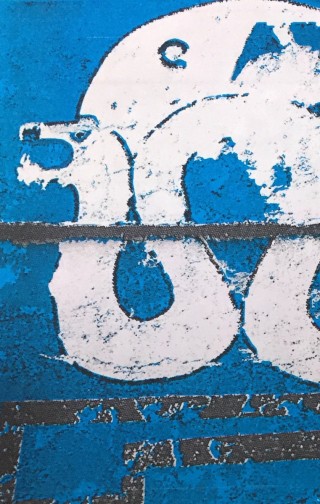 On his side of this new split tape from Lighten Up, Peter Kris of German Army glues together chunks of heavily processed field recordings taken while on a trip through Portugal. “Lost River” is much more subdued than any of the industrial or minimal synth heavy releases Kris has put out as German Army. With Concrete Colored Paint, rhythm is abandoned, and the sounds settle into a lethargic flow of decay, hiss, and murk. Some of the elements are more recognizable than others, such as the slightly slowed bird calls near the end of the piece, a quality that places “Lost River” somewhere in a sonic uncanny valley. It’s equally haunting and comforting, conjuring up familiar scenes of cavernous, echoing museum halls and mist-drenched city streets. This rich atmosphere isn’t exactly shared by Tap Water’s contribution to the split; where “Lost River” is aquatic and stuffy, the duo’s untitled track is dry and unpredictable. The two sound-plunderers bounce whimsical modular blips off of distortion and playback manipulation, almost completely abandoning the flooded organics of “Lost River.” That is, until around two thirds of the way through, when a stack of spectral, effects-laden tape loops swirl into the fray, bringing the track to a close not unlike the A side. It’d be easy to say that the two sides of the tape don’t share much common ground about thirty minutes in, but as a whole, they stand quite well together.