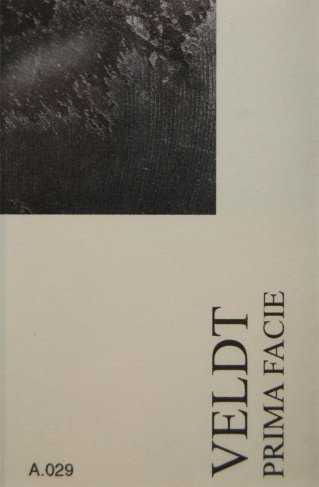 Like Cody Lobbestael’s previous two releases as Veldt, one of which (Skin Solutions) was also released on Archive, Prima Facie is a collection of brooding, formidable industrial techno. Rather than aiming for punishing hypnosis and aggression, Lobbestael relies on nuance and minimal composition as the driving force behind these tracks. Though each explores varying energy levels and sounds, we’re provided with a reliable constant in the form of the bass back beat, whose tone remains unchanged throughout the album. It gives a sense of unification throughout the four pieces that comprise Prima Facie, from gluing together the stabs of distorted electronics that begin “Male Disorder” and providing a backbone for the meditative, evolving loops of the slow-burning “Thistle and Thorn” to framing the incessant tension-building of “Gated Expression.” Though almost all of the textures and elements harnessed by Lobbestael are relatively clean and sterile, the things they evoke are anything but; the cloying scrapes that mark the decay of “Gated Expression” are mysteriously affecting, organic, even vulnerable, and they make the grimy pound of “Roots (You Are Dead to Me)” seem even more vicious.