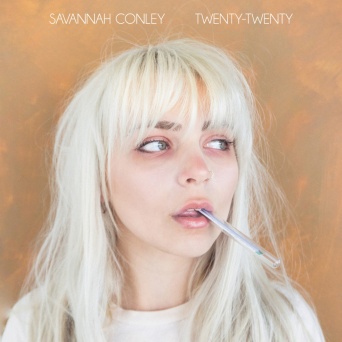 If I hear one more person misextrapolate their hatred for the “modern country that’s on the radio” to the entire genre, I’m going to explode. The industry, even with all of its firm roots in good ol’ traditional Americanism and Western grit, is giving a voice to many a new artist with plenty to say. Savannah Conley is a newcomer from Nashville, releasing her first three songs on the 7″ EP Twenty-Twenty, a melancholic but gorgeous iteration of the dream pop infused brand of Americana that I fell so deeply in love with last year with Kacey Musgraves’ wonderful Golden Hour. Conley is barely in her early twenties, but her commanding vocals reach far above the juvenile angst all those damn cynics would be quick to assume, crooning out the sparse narration of an existential crisis on “Same Old Eyes” and meditations on the messy battleground of young love that hover somewhere between sardonic self-awareness and naïve idealism on “All I Wanted”—the latter of which, even on this superb three-song punch of a record, is easily one of the strongest and most enthralling tracks I’ve heard this year. “Never Be Ourselves” ends things with some more energy, but the heartbreaking wistfulness doesn’t quite escape Conley’s words, as she repeats the titular phrase and her vocalizations melt into the airy ambience of shimmering cymbals and reverb-heavy strums. Twenty-Twenty is a concise and fantastic debut effort that is sure to put this new artist on the map (and is also sure to be a vehicle for my endless crusade against the rampant, misguided disdain for country music).