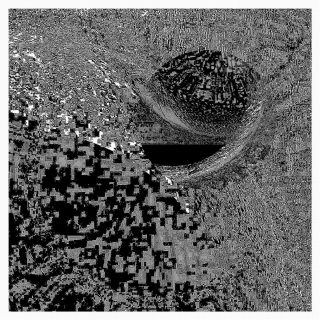 German sound artist Hans Castrup is no stranger to working with unconventional sound sources, having been releasing recordings in various realms of experimental electronic music since 1981, whether as a solo performer or contributing tape and synth sounds to his band Poison Dwarfs. But his past three solo records on Karlrecords, including the recently released Heterogeneous Cell Information, involve a much more intense and subversive approach to music-making, coming across as uncanny, immersive symphonies of sounds natural, unnatural, and everything in between. Every other track on Heterogeneous Cell Information features the vocal talents of Carla Worgull, whose haunting, droning overtones cast Castrup’s much less recognizably human compositions into a new light. But the interplay between his dense overlays of simmering synths, murky magnetic tape manipulations, and unidentifiable recorded excerpts and Worgull’s vocalizations is only the most immediate example of the contradictory relationships that make the album such an elusive, alien experience. With these Castrup demonstrates his versatility in varying approaches, by both seamlessly interweaving electronic and organic sound sources and allowing both organic and controlled dynamic behavior in his induced interactions—with the latter I mainly refer to the convincingly natural motion of opening track “Cell Information,” which contrasts sharply with the disarming stop-starts of “Plain Cutting Edges.” Even when Worgull is not present the pieces are just as otherworldly, giving Heterogeneous Cell Information consistency but not homogeneity, a quality quite faithful to the album’s title.