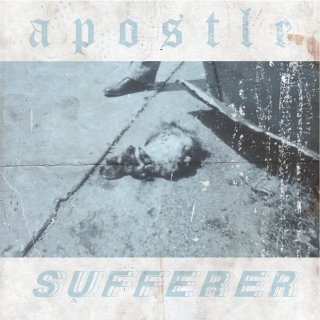 Dark, hypnotic, and at times downright scary, Sufferer doesn’t relinquish its strangling hold save for the more reserved interlude track “Sparrow,” which is still shrouded in the same oppressive, nocturnal atmosphere as the more aggressive songs. Bathed in resonant low end and waves of distortion, Apostle’s palette of crushing blast beats, meditative rhythmic repetitions, and infectious breakdowns is united by an all-consuming production style. Bassist Cameron Austin’s vocals seem to originate from less metallic influences, and most of the lyrics are pretty easily discernible within his desperate, strained shouts, but they sound even more despairing as they struggle to escape the gravitational pull of the massive instrumentals. The band works up quite a racket for a three-piece, structuring their endeavors around droning blankets of guitar fuzz and relentless pounding drums. An overwhelming feeling of impending doom takes hold on “Nearer My,” some seriously nightmarish heights are reached on “Amor Eterno,” and the full potential of Apostle’s eclectic formula is reached with “Stasis,” a monster of a track that lulls with slowly developing grooves before crashing down into an insane climax.