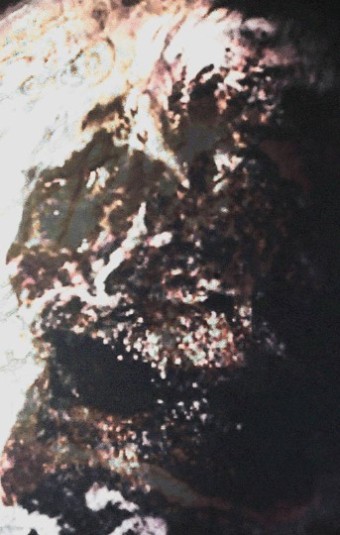 Despite its overall disorienting atmosphere and restless, unpredictable form, Invisible Touch finds its footing in the richly organic, much like another 2019 highlight from Reserve Matinee: Hanging Lichen’s Old Northwest (Growing). But “footing” does imply a level of stability that just isn’t found in Eric Grieshaber’s abstract granular workouts and found sound manipulations. No sound in Invisible Touch is comforting or even reliably permanent; the multitude of elements in these six tracks are constantly caught in frenzies of entropy, bouncing off each other and around the confines of the sonic environment like agitated gas particles. The dense clusters of tactile ricochets that bound throughout “Starlight” and “Memory of Apex” emulate a rattling blender filled with globs that clash and meld but never truly homogenize; “Macing Dog” slowly slogs along a trail of slime, a gelatinous mass of dragging bulk and slapping tendrils; and “Neural Lace,” apparently just a synthesizer jam, outlines some truly cosmic territory with spacious kinetics. It’s a theme throughout Invisible Touch that the heavily processed sounds end up taking on the form of some much more recognizable source; listen to just a few seconds of “Piss on Money” and it appears to be just a cloud of detached rings and high end resonance, but overall I can’t help but be reminded of some sort of sterile retail environment, the noises resembling dinging cash registers and scanner beeps.