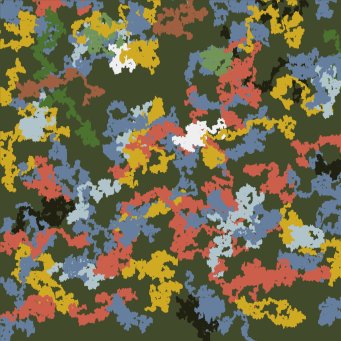 Trumpet improviser and computer music artist Forbes Graham might have the most modest and pragmatic website I’ve come across. It’s simple, archetypally HTML, consists only of black text on a white background with only a few embedded files, and it doesn’t even require a single scroll to see its entire contents. Such a minimal online presence might suggest a similar approach to music—a collection of reductionist trumpet improvisations, perhaps, or some sort of silence-heavy concrète piece. Lagos Playground, which from what I can gather is Graham’s first full-length solo release since 2013’s ambitious Return: The Journey, doesn’t submit to such expectations, instead delivering a colorful soundscape of field recordings draped in various manipulations. Unlike Return, his extended trumpet techniques aren’t present this time (or if they are, they buried deep amidst the other source material). Lagos Playground is certainly not minimal but it is modest, and what you hear once each track begins is, for the most part, what makes up the rest of it too, as Graham allows the inherent narratives of the recordings to progress without intervention, festooning the distant conversations and clatter with distortion, glitched-out mangling, and other effects. The processing in “The Yellow Light” is pretty subtle, but once “Simlinks I” kicks in there’s a delightful noisy rumble that materializes, lushly chromatic in a way not unlike The New Blockaders’ Live at Hinoeuma (which I bring up mostly because I was listening to it earlier today). Graham ramps up the abstractions on closer “Sonic Halberds,” which for nearly four minutes doesn’t reveal any sign of reality amidst its fuzzy looped cells and pitch alterations until the voices being sampled briefly break through. This last piece is definitely the album’s most elusive, and possesses that peculiar frailty that’s present when abrasive noise textures originate from disproportionately subdued sources.