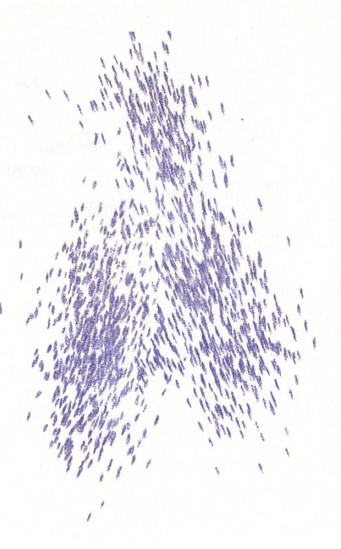 There isn’t much on Residues of Time that could be easily mistaken for normal, everyday sounds. Even during moments where the source material doesn’t seem to be processed at all, like the beginning section of “De Entro,” there’s still plenty of detachment; any naturalness we attempt to latch onto is always unseated by some form of digital disruption or an even less decipherable ambiguity. And yet I was very aware of my surroundings when listening to the new tape release from French sound artist Méryll Ampe, constantly removing an earbud and looking over my shoulder to see if that was really the door opening, or if some distant conversation I hallucinated is actually taking place. I attribute this phenomenon to Ampe’s singular ability to make music that truly resembles “residues of time,” removed and alien remnants that retain just the barest semblances of their much more familiar origins, the mysterious discharge of temporal passage gathered and shaped into something incredible. This is why we’re able to find so many handholds throughout this uncanny odyssey, even if they are so often yanked away before they can be used; why the cold, stripped-down drone that begins “Residues of Time III” is somehow invigorating, even triumphant; why the heavy, jarring glitches that plague “Autour du lac” are so profoundly unsettling. Residues of Time is a spellbinding album that is not only fascinating for its highly abstract sonic palette, but also for the microscopic hints of reality that it (mostly) conceals.