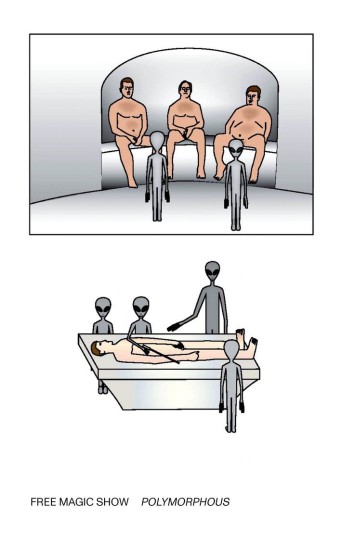 Polymorphous is not an easy tape to describe. To my knowledge, this is the first release by Free Magic Show, the duo of Edinburgh sound artists Joe Coghill and Michał Fundowicz, and introduces a singular, indefinable style conjured with computer, tape, and radio. Pairing well with the unsettling cover art, many of the pieces are a bit (or more than a bit) uncomfortable, humid, sweaty, claustrophobic. Incessant loops jitter into unsteady rhythmic pulses that throb with urgency at some times, lethargy at others; heavily processed sound effects and radio grabs materialize like extradimensional transmissions; tactile thumps and shifts evoke dark industrial underbellies and alien technology. According to the artists, the work they have produced is an “improvised magic show with sounds effects,” a quite, erm, loose description that makes the sounds on Polymorphous even more compellingly cryptic. “house music” is one of two significantly longer tracks on the tape and a masterpiece of enrapturing ambiguity; percussive digital reverb-bombs are launched from the magicians’ table into the massive, empty room to which they perform, their impacts sending shockwaves throughout the space as the lonely sound of slowed-down singing and other melancholy manipulations play out on center stage. I suppose Polymorphous is a “magic show” in the truest form, in that it delights in pure surprise and spectacle—regardless of how utterly bizarre those may end up being.