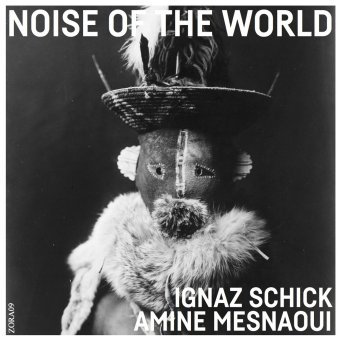 I’ve been a fan of Berlin-based improviser Ignaz Schick ever since I first heard Live • 33 • 45 • 78, his superb duo recording with fellow abstract turntable virtuoso Martin Tétreault. Schick is a fascinating contributor because its impossible not to try to visualize the vast array of motorized devices, objects, repurposed instruments, and turntable preparations of which he makes use during his performances, his crowded table setup emitting carefully constructed currents of switch-flips, whirs, and mechanical drones. Noise of the World documents more of an unusual pairing for Schick’s approach: that of Amine Mesnaoui, an African sound artist and traditional music performer who shares Schick’s love of subversive forms and Moroccan traditional music. Both of these predilections are present in ample quantities on the pair’s debut release, which filters Mesnaoui’s Gnawa sensibilities through an “untuned” Fender Rhodes and grand piano while Schick injects a wide range of textural and rhythmic elements, from struck organ pipes and Shruti box to agitated surfaces and tonearm abuse. Though the two musicians’ improvisations wander into various stylistic locales, from the relatively classic improvised approach on “Nat-Nat” (Mesnaoui’s chords remind me a bit of Tilbury) to the meditative polyrhythms and mysticism one associates with African music, they are always incredibly engaging.