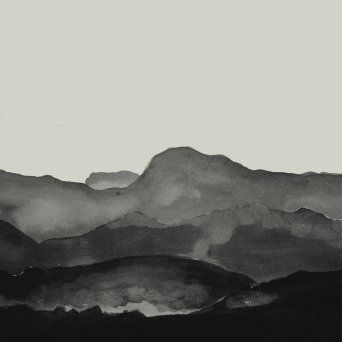 The members of the amorphous UK-based Mosquitoes/Komare crew seem to be no strangers of the sort of existential despair and hair-raising ontology that I can never stop reading or thinking about. The first Mosquitoes 12″ features titles drawn from the work of experimental author Christine Brooke-Rose, whose Out/Such/Between/Thru tetralogy delves deep into surreal, delirious comedy and the confusion and agony of being, but Komare’s new LP—whose pre-release inclusion on my First Half of 2020 list was unconventional but still an absolute no-brainer—reminds me more of the mud-crawling malaise of Samuel Beckett’s “muh-” characters (Murphy, Molloy, Malone, the Unnameable, and finally just ‘a man’), increasingly spare and fragile consciousnesses cast into sentience from void. The sonic palette at work on The Sense of Hearing is perhaps the most minimal of either of the two related groups’ releases thus far: ghostly shades of humming electronics, lethargic delay-slogged vocalizations, shifting and snaking layers, a whole lot of empty space. To listen is to be surrounded by a palpable void, the paradoxically deafening sound of nothingness ringing in the ears as one slides, stumbles, slithers through a pitch-black and entirely unfamiliar landscape. The “drugginess” of this album is certainly an important element, but after many listens I’ve come to the conclusion that The Sense of Hearing gets you a different sort of high than any substance I’ve ever tried; its intoxication is one of blurred perspective, eroded security, creeping doom. The whispered threat of an eternity alone.