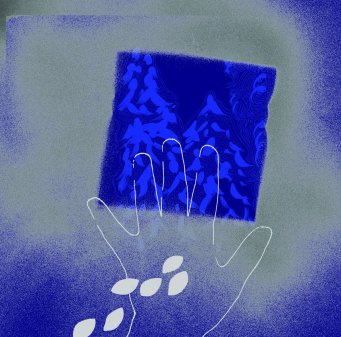 The music of Marijn Verbiesen under her Red Brut moniker is an important piece of evidence for a claim I often make: that amateurishness (or at least the appearance of it) is not an inherently negative attribute, and its presence can even elevate the quality of the work in question. I most frequently appeal to this in the context of more conventional genres, but Red Brut’s lo-fi tape experiments demonstrate its importance in the field of experimental and abstract music as well. Cloaked Travels is a multifaceted expansion upon her self-titled LP that was released by KRAAK in 2018, embarking on two extended four-part suites with the help of a delectable palette of sticky fuzz, queasy warble, and steamy warmth. Even more fascinating on this release is the increased prevalence of a phenomenon of “obscured simplicity” that often lurks at the heart of the tracks; there never seems to be too much going on in a Red Brut piece, but at the same time it’s usually pretty damn impossible to tell how exactly the sounds are being generated. Verbiesen is clearly utilizing the tried-and-true practice of magnetic tape manipulation, but her approach to it is a deceptively singular one that doesn’t turn too much focus toward any single aspect of the medium itself (fidelity, looping, delay, etc.) on its own. Instead, it’s more like it unspools with an unexpected fluidity, mobile and malleable despite its almost plasticky clunkiness, soft wobbling waves of spinning reels and forgotten instrumentals flowing into the humid morning air.