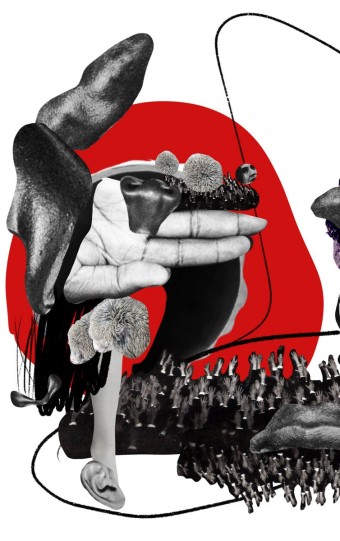 The title of the first of the four pieces that comprise Flock, “Cohesion,” works well as a succinct summary of these two musicians’ approach to their inaugural recording. Patrick Shiroishi’s virtuosic saxophone is entirely assimilated into Eldar Tagi’s arsenal of modular synthesis and amplified objects as both adjunct and source, the uneasy scalar runs or non-musical extended technique meanderings seeming to seamlessly morph from being solitary elements into the dense layers of loops, effects, and other processing in real time. But if such a description implies that this tape is in any way homogeneous, think again. The adventurous duo examines every possible angle of this collaborative setup, constantly exploring the various forms this unusual hybrid of improvisational “hierarchies” can take, from the initial chaos and successive cathartic swell in “Cohesion” to the broken sound bits and fractures writhing in the bottom of a deep abyss in “Herebefore” and the sparse spider-leg textures of “Fragments of I.” This latter track, which closes out the just-under-30-minute release, is probably my favorite, and demonstrates the most compellingly evasive results of Shiroishi and Tagi’s singular instrumental arrangement while also somehow being the most palatable. This is a tape that seems to be over too soon; each segment drifts imperceptibly into the next, and within each one the clock seems to be changing faster than it should. Beware: compulsive relistening will almost certainly ensue.