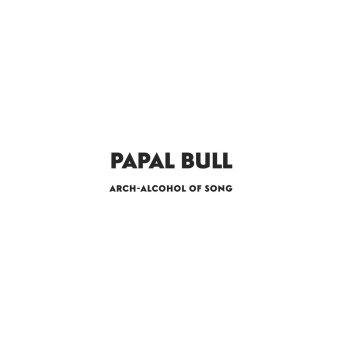 The creative meeting of two artists so intensely dedicated to a most extreme bizarreness is a bit too much for our fragile world I think, so I suppose we’re lucky that Papal Bull, the duo of Jon Marshall (Akke Phallus Duo, Roman Nose, Singing Knives Records) and Joe Murray (who releases countless solo and collaborative releases mononymously as Posset), has been so sparing in their musical output. The project seems to cultivate both artists’ most surreal and subversive inclinations—for example, their last release in 2016 was entitled In Is In, An Is An, Nrmeegecy Is Emergency, Uyo Is You, Cna Is Can, Siht Is Shit, On Is On, Polihs Is Polish, Tiancvdseetas Is Sedevacantist, and their 2013 debut In Ceres a Pig with Human Hands and Feet Was Born whips up some of the most nightmarish, twisted noise I’ve ever heard—and Arch-Alcohol of Song is no different, so don’t be fooled by My Dance the Skull’s minimal cover design template, which is not an all representative of the strange, slippery, complex sounds found within. Well, not entirely, at least; there’s a certain sparseness to the snaking tendrils of gurgle, moan, gargle, hum, actual speech, and everything in between, only occasionally offset by instrumental excursions, as in the second “movement” of the B side track. Various disparate layers materialize as nodes in a sprawling but spindly web of soggy crackle and vocal delirium—although I suppose neurons might be the more apt metaphor, considering how everything feels so immediate and gestural (which, if you have any experience with either Marshall’s or Murray’s other work, should be no surprise): jets of crackling thought constantly charge the mass of connections, often lighting up large sections of the network with a wan, sickly glow, occasionally descending into darkness with the barest flickering. Wade into the dark pool in the center of the cavern—or is it a mouth?—until its slimy, oily surface closes over your head to learn many great secrets. Or you might just stub your toe(s) on the Bronze Ball at the bottom. But I’m done writing; words are soooooo boring. Hence why we gurgle and moan and gargle and hum.