In December, the month of end-of-year lists galore, I’ll be focusing more on summarizing my favorite music that I heard this year rather than reviewing new things—among obvious other reasons, I need a break from the constant new music! For me, December is not too early to assess the year as a whole, because I won’t be able to spend enough time with anything that comes out this close to the end of the year to confidently put it on a list. As with everything on this site, these lists and features will be intended to encourage discovery of new things; the fact that they are my opinions is secondary.

2018 was a year of looking forward for many artists, but brand-new music wasn’t the only thing dominating my listening these past eleven months. From reprints of old, hard-to-find albums to collections of tracks that hadn’t previously been available at all, here are my favorite archival releases from 2018.

This year, legendary sound collage artist Graham Lambkin made many of his releases available digitally on Bandcamp. It was the first time many of his beloved albums had seen official digital versions; many of them were released as LPs and cassettes on Lambkin’s now-defunct label, Kye, including the wonderful Poem (for Voice & Tape) and Amateur Doubles. But the uploads were also accompanied by a compilation of unreleased material that was soon followed by a second volume, and both collections rank handily among Lambkin’s best work. Vol. 1 brought us the fluid, personal “Summer Tape Work,” the mundane beauty of “The Pack,” and some informal experiments such as “Concert Review.” Vol. 2 somehow upped the ante, unveiling the gorgeous staticked sighs of “Ghost Boxes,” an abridged version of Lambkin’s arresting sound poetry piece “Unfocused Hands,” and the first official digital appearance of “Abersayne” and “Attersaye,” two of the most uncanny and affecting songs ever created.

Recollection GRM, a sub-label of Editions Mego, has been reissuing collections of significant avant-garde works, mainly in the realms of electroacoustic composition. Tremblements… comprises two pieces by François Bayle, the composer who famously coined the concept of ‘acousmatic music’ and founded INA-GRM, the label whose releases Recollection GRM reprints. Both pieces, “Tremblement de terre très doux” and “Toupie dans le ciel,” maintain a reserved, almost ambient atmosphere despite the large quantity of both synthesized and recorded sounds used throughout. This was not my first of Bayle’s works, but it was the first that I fell in love with; here, he easily matches (and often even surpasses) the skill and techniques of his mentor Pierre Schaeffer, the father of musique concrète, creating abstract soundscapes that are as focused as they are eclectic.

I’d like to say I listened to every minute of music contained on this massive collection, but if I did I’d be lying. Experimental Works collects the complete output of Ross Baker’s 2T project, as well as some releases under various other releases, from 1995 to 2017. It contains nearly fifteen hours of material that ranges from varyingly active radio play and sloppy plunderphonics to well-crafted concrète music and patient, if occasionally indulgent, drone pieces. Baker didn’t exactly use any fine-tooth combs when releasing his music, but the sprawling unfiltered-ness of Experimental Works allows it to be an imperfect but comprehensive auditory document, and listening sequentially tells the fascinating story and evolution of a developing sound artist. From laugh-out-loud moments of anti-music irreverence to periods of admirable focus like the “Headache Therapy” series, this is a compilation that shouldn’t be overlooked. 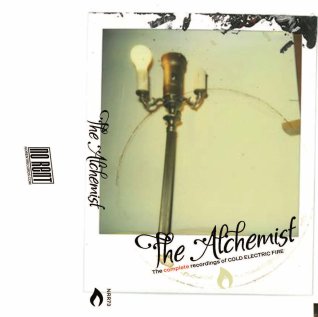 Even in their maelstrom of 2018 releases, No Rent Records made time for some not-so-new material. Gary Tedder’s brief stint as Cold Electric Fire yielded two CD releases and a split 10″ with Facedowninshit, and the music from all three of which is present on The Alchemist along with completely new tracks that were never released (a track from 2002’s In Night’s Dream We Are Ghosts was repurposed for the Facedowninshit split). As typical of No Rent, the packaging for this two-tape set is incredible, and the innocuous image used as the cover is a perfect representation of the meditative, droning analog ambience that was so diligently created by Tedder, radiating a comforting warmth even at the compilation’s tensest moments. The highlight of The Alchemist may be the unreleased project A Cursory Sweep of the Insurmountable, an ambitious collection of processed instrument drones. Every aspect of this release makes it one not to miss, even the beautiful photographs that color its twin J-cards and Jason Crumer’s meticulous and thoughtful introduction.

Originally released as Canadada on Griffin House in 1974, The Four Horsemen’s debut LP was one of the finest examples of text-sound, or sound poetry, when the art form was arguably at its creative peak with peers such as Sten Hanson and Charles Amirkhanian. But Nada Canadada stands out even now, mainly because of its profound sense of community. The members, including bpNichol, Rafael Barreto-Rivera, Paul Dutton, and Steve McCaffery, always made an effort to keep their abstract poetry attached to its roots, and their words are almost entirely discernible even amidst the chaos whipped up in “Seasons” or “Monotony.” I think Rafael Barreto-Rivera puts it best: “The number of words we still use in our poetry comes as somewhat of a surprise to us, especially in the light of this album. Strictly speaking we cannot call what we do sound poetry if by it is meant that poetry which has its basis in non-verbal, vocal, and sub-vocal elements of sound. Nor are we into the electronic ramifications of sound in any sense beyond doing a record. We are in fact reluctant to pin the aesthetic continuum on which we operate to the first wall available. Still, perhaps the best name for what we do is what it always has been: poetry.”