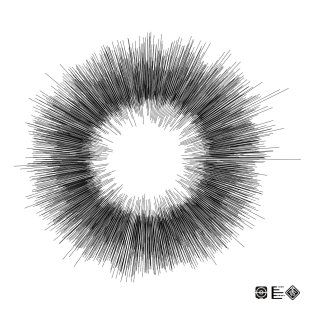 Recently I wrote about four recent releases of acousmatic music with very unusual sound sources. Julien Bayle’s new release, Violent Grains of Silence, might have all of them beat with its concept. Bayle recorded two hours of complete silence in the anechoic chamber at Laboratoire de Mécanique et Acoustique de Marseille, one of the quietest places in the world, and all of the sounds used to produce Violent Grains of Silence were taken from that recording. The album is anything but silent, however; Bayle focuses his attention not on the state of silence, but on the impossibility of it. He amplifies and manipulates minuscule errors and signals in the system he used to record, ghosts still present in what anyone would probably agree is the complete absence of sound, twisting them into cold, mechanical bursts and shifting piles of crackles and hums. Even if one isn’t aware of the album’s unique origin, small elements of the noises Bayle makes use of reveal that something is different; he propels these tiny glitches with disproportionate force and velocity, making even the most intense assaults of bass-y tones and high-speed clicks unsettlingly thin, even tenuous. Regardless of how much substance the sounds found on Violent Grains of Silence actually have behind their unforgiving facade, the album is ultimately loud, and Bayle declares victory in his war on silence despite being deep in enemy territory.