First, I want to thank anyone who sends me physical items for review. It’s already amazing to receive digital copies for consideration, but the fact that my writing warrants people wanting to pay to ship stuff to me is extremely humbling. I greatly appreciate it. 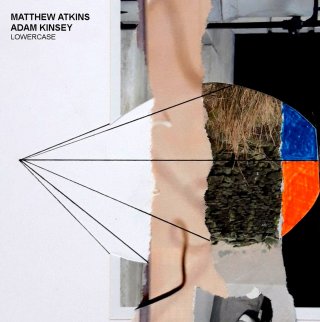 Lowercase documents a collaboration between British sound artists Matthew Atkins and Adam Kinsey, both of whom are quite active in London’s experimental music and improvisational community. The name of the CD evokes common traits of the titular genre, which often features an emphasis on silence and purposefully sparse composing, but the vivid constructions conjured by Atkins and Kinsey don’t feel restricted by any such constraints. The colorful two thirds of an hour of Lowercase bubble and boil through evolving mixtures of tactile object interplay, fragile granular textures, and field recordings coated in varying amounts of manipulation. The release situates itself in a sound-world that is consistently calming and always a bit familiar, but the two artists never neglect to push this envelope of comfort closer and closer to the breaking point, bending and twisting and stretching the elements they introduce into increasingly elusive configurations. The ever-present balance of the tangible and the detachedly synthetic, the distorted tape groans that conclude part one, the immersive but almost uncomfortably intimate stereo space… it all materializes into an abstract musical language that never quite lays all its cards on the table.