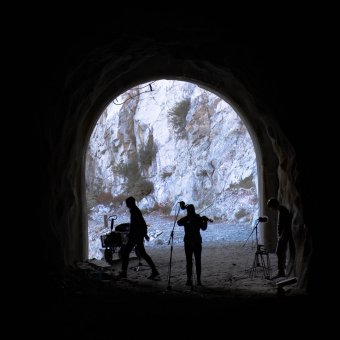 What a lovely piece of art this is. Mueller Tunnel offers a different sort of escapism for me amidst this collective isolation than, say, Jessie Ware’s What’s Your Pleasure?, instead following a trio who aim to become one with surroundings far from civilization. Tim Feeney, Cody Putnam, and Cassia Streb, along with photographer Eric Basta, “hiked in with a wagon full of recording equipment and instruments strapped to their backs,”all of which appear to have been harnessed to create this final product. “windward” begins with the familiar sound of a creaking door—familiar, that is, in a domestic space, but contextually it seems strange in a half-buried mountain tunnel. That’s only true if you’re aware of the recording location before listening, however. Unlike many performances I’ve heard in singular, meaningful spaces, the geometry of the tunnel is largely kept a secret, the oppressive stone walls smothering any reverberating remnants. Shuffling plant matter, chirping birds and other animal noises, receding and approaching footsteps, intimate object clatter, inhales and exhales, the rumble of distant traffic, a train rushing by almost too close for comfort, tentative but sublime violin scratching; all of these elements, whether incidental or intentional or perhaps both, form the three delicate soundscapes that comprise Mueller Tunnel, each its own natural, ebbing coalescence of various sounds, large and small (mostly small, I’d say). The expanse between those large and small sounds is often jarring, especially in “warren,” when the up-to-that-point-constant metal/concrete swirl abruptly ceases, leaving only a distant, ominous, slowly encroaching rumble. From there it evolves into more kinetic, involved improvisation (a term I use cautiously and conditionally, considering the pieces have corresponding graphic scores), miniature rock-slides and cave-ins, space both stretched and punctured by a consistently moving body and the incessant xylophone ring, respectively. Once the fragile ray-of-sunshine string chord drone kicks in, I’m a goner. This album is exactly what I needed this month. Heart eyes (or heart ears? I suppose both, because of the photos) 100%.

Mueller Tunnel can be purchased as both a digital download or a limited edition art book with CD featuring Basta’s photographs here.

I tend to focus on material that resides in the experimental or avant-garde realm of music, but nothing is off limits. If you have an album you’d like me to review, please email me or comment on a post. When I say nothing is off limits, I really mean it. However, I only review albums I like, and the “reviews” themselves (“blurbs” might be a more accurate label, but god, what an awful word) are more intended to encourage discovery rather than to express my personal opinion. Also, I will be much more likely to review an album if it is not sent as a promo blast/press kit. I almost always restrict coverage to things that have come out in the past two weeks or so.

**I will no longer review or link to any material hosted solely on Bandcamp. Only submissions of any other kind—physical, file transfer, FMA, Soulseek, etc.—will be accepted. I know this is not the most convenient policy for many, but blame Bandcamp, not me. If you have rehosted previously reviewed material elsewhere and want me to switch links, please reach out.**

**Material hosted on Nina Protocol or any other platform associated with cryptocurrency, NFTs, or artificial scarcity of any kind is also very much unwelcome here.**