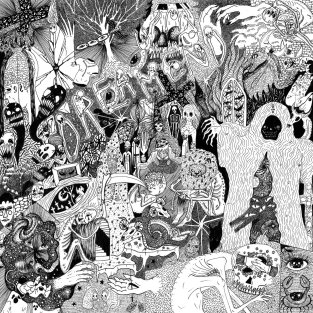 The day Ryan Graveface announced a new Dreamend album was a good one. The self titled LP is the project’s seventh full-length release and the first in six years, the last being 2012’s And the Tears Washed Me, Wave After Cowardly Wave. Unsurprisingly, it sounds like a ton of work was put into this music. Though almost every instrument is played by Graveface himself (with the exception of the percussion work, which was handled by TW Walsh), Dreamend sounds full-bodied and detailed. The production is considerably denser and more meaty than previous releases. I’m not so sure this is a good thing; I, for one, fell in love with the haunted, ghostly atmosphere present on many of Dreamend’s previous albums, and it’s sorely missed here. But overall, I’m glad this album is a step forward for the project, rather than a retread. Graveface’s songwriting is the best it’s every been, finding a middle ground between textural exploration and more concrete structure, two elements that could never quite seem to get along in his songs prior. I’m completely open to the fact that I will warm up to Dreamend more as time goes on, and that right now I’m focusing too much on the past. Regardless, it’s definitely an enjoyable album, and is Graveface’s most fully realized and well constructed work to date.