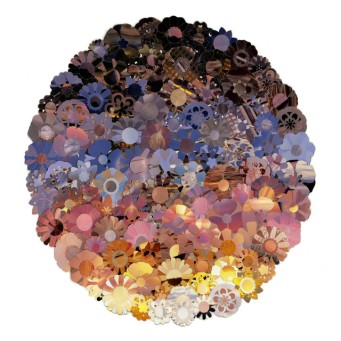 Well, this was a surprise. The west coast-based experimental collective Jackie-O Motherfucker (hereafter JOMF) has been one of my absolute favorite artists for a very long time, but even I was unaware that they had released a new album earlier this month. The release was quiet, but the music is anything but. Spliced together from a massive amount of material recorded in and around stacks of steel pipes, Bloom is one of JOMF’s fullest sounding records. Though I’d cite the skeletal, wispy atmosphere on many of the band’s records as being one of my favorite things about their sound, it actually really works here. In fact, I found myself liking Bloom for many reasons that are the complete opposite of what I normally identify with JOMF. The songs are relatively brief, structured, and rhythmic; and the vocals/lyrics play more of a role in the music than ever before. But even though it appears that they’re going in a much more conventional direction on this record, it definitely doesn’t feel like a step back. Instead, they just seem to be applying their usual freedom and colorfulness to a different format. Notably, “The Strike” might be one of the weirdest songs they’ve made since their early days, and to my delight the horns take center stage – almost Evolutionary Jass Band style. Greenwood’s less than flawless singing is much more welcome this time around, his earnest croons conveying emotions in a pleasingly indirect way. I might have to get over my initial excitement (and bewilderment) to form a more complete opinion, but as of now I’d place Bloom as one of JOMF’s best albums since Flags of the Sacred Harp, and I couldn’t be happier that they are still up and at ’em.