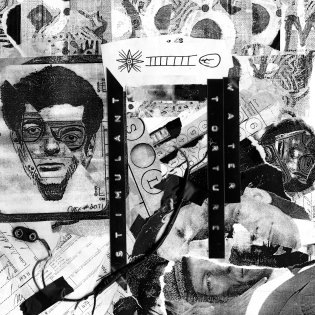 Like a lot of other hardcore fans, I was under the impression that I wouldn’t ever hear any more new material from Water Torture. The New York trio disbanded almost three years ago, just months after releasing their only full-length, 2014’s brutal and brilliant Pillbox. But fortunately there wasn’t much to complain about; members Thomas Leyh and Ian Woodrick moved on to form Stimulant, a powerhouse of sludge-filled grindviolence whose self titled LP last year blew any of Water Torture’s releases out of the, erm, water. But fortunately, both bands appear on this surprising split release from Nerve Altar, and there is no mercy to be had throughout these 35 pummeling minutes. Stimulant’s side continues everything I loved about their previous record, fusing metallic noise bursts and harrowing sample interjections with furious blasts and blown out vocals. In my opinion, the duo is at their best on their short songs, and there are plenty of those here; but the three minute “Strangled Thought” that closes their half is equally vicious. Water Torture, by contrast, seems to take things slower. Their brand of body wracking, noisy sludge feels as fresh as ever, but by the end I felt myself wanting them to let loose more. The vocals are the most unhinged part but even they seem held back by the middling tempos and riffs that aren’t nearly as heavy as they should be. A bittersweet release, because as far as I know this is Water Torture’s swan song; but personally I am much more excited for where Stimulant goes next anyway.