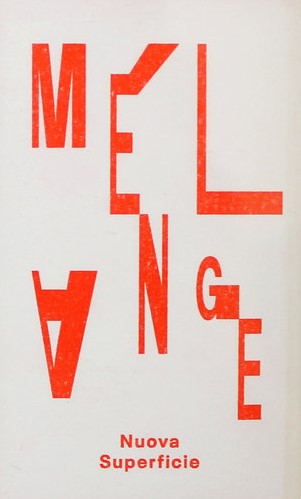 Giovanni Lami and Enrico Malatesta, two of the most talented figures in Italy’s thriving experimental music and sound art scene, came together exactly one year ago for a performance and workshop at Villa Sorra. Now, Granny Records has released a cassette containing combined and remixed material from that performance, along with other prior live recordings. The result is just as fascinating and immersive as you’d expect. Lami’s crackling tape textures and frail concrète constructions are a perfect match for Malatesta’s intimate skin drum and metal object percussion. Thanks to Giuseppe Ielasi’s mastering, which is amazing as always, both sides of Mélange make use of a terrific dynamic range. Side A is a lush yet delicate collage of sounds, and despite the very corporeal nature of most of the elements, the ensuing mixture is surprisingly airy and intangible. The sparser B side demands more patience, sometimes retreating into complete silence, and when sounds do appear they’re placed within a brilliant auditory chiaroscuro. While I obviously had a more immediate reaction to the first side, the entire tape is tremendously fulfilling, and the artists’ reverence for both the individual sounds and the resulting pastiches is palpable. If you are unfamiliar with either Lami’s or Malatesta’s solo work, I would highly recommend both; especially Bias and Benandare.