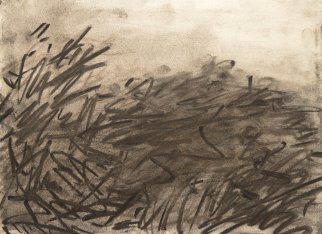 I first encountered the music of Ushinawareta Tamashī on his split C120 with Warui Yume, one of Lurker Bias’s last releases in 2018. Though both walls were great, Tamashī’s really sucked me in. The dark soundscape of “Runessansu,” formed by an oppressive rumbling and a distant, persistent scraping, is claustrophobic but natural, and before I knew it I’d listened to the whole 60 minutes. Shinda Yuki is a less overtly wall release, with both tracks consisting of largely unmanipulated nature recordings, but the meditative, stagnant atmosphere is still present. The first part presents a much less compressed palette of textures than “Runessansu,” capturing the soft, tactile sounds of falling rain and rustling branches. Both tracks are recordings of storms, and as such the howling of the wind plays a significant role in each; in part one, the wind is a distant presence, occasionally creeping in the sides of the mix, while in part two, the gusts are much more isolated, cast into clarity by the muffling of the rain sounds. My favorite thing about Shinda Yuki is how much movement it evokes without, in a manner of speaking, going anywhere; even in subtle ways that aren’t immediately apparent, like the barely discernible crinkling noise amidst the din of part two.