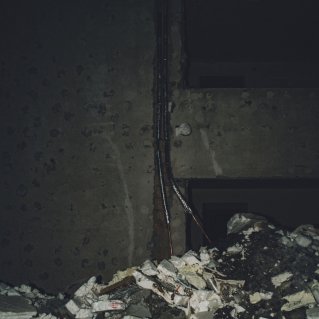 Though there is no shortage of things about Matthias Urban’s newest solo release Half-Silvered Mirror that make it a fascinating and engaging experience, what immediately stands out is the incredible mastery of sound demonstrated throughout its 38 minutes. Beginning with a sparse cluster of clattering clutter, Urban instantly establishes a concrete sense of space and environment. From then on, each carefully mixed element that is introduced into the lush collage is given a distinct location within the space of the album, a unique role amidst the countless other ingredients that contributes to the piece’s overall form. Painstakingly built using tape recordings, violin, percussion, objects, and voice, Urban’s auditory sculpture ambles along with roiling kinetic energy, a veritable katamari of sound and texture. The composition has a presence that is considerably different from the last release of Urban’s that I heard (SiAl, released last year by Dinzu Artefacts) but the sounds retain that staggering power and punch that makes his work so magnetic.