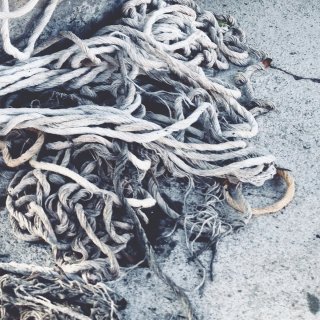 In 2008, Jon Borges’ most renowned solo project became a duo with the addition of cellist and multimedia artist Shannon Kennedy. Austere, an ambitious but flawed release, marked the effective conclusion of Borges’ solitary adventures into harsh noise through a lens of both formal musique concrète technique and emotional catharsis. This is not to say that Kennedy’s membership in the project hindered its creative activities in any way; instead, her arrival steered Pedestrian Deposit to a much less raucous and more meditative sonic palette, the newly added acoustic instrumentation and inclination toward visual and spacial integration pushing the duo to create astounding works such as Kithless and Eleventh Hour. Dyers’ Hands is their first release since 2015’s The Architector, an album steeped in atmosphere but less so in compelling ideas, and in my opinion is PD’s best work since the modern masterpiece Fatale. The sense of space in this record is simply mind-blowing, from the echo-caked clatters that plot an abstract void on “What Can’t Be Taken” to the claustrophobic blasts of contorting noise that are some of Borges’ most well-developed and purgative. Dyers’ Hands is focused, purposeful, and the first of PD’s releases with Kennedy to truly embrace the dichotomy of these two artists’ paradigms and how they can both combat and combine. Look no further than the monstrous closing track “Beneath the Salt” for evidence of this seemingly newfound understanding, get lost in the straining string loops and hulking suspense that threatens to collapse at any second—and it does, with a cleansing wash of searing feedback that somehow feels more achingly empty than the quiet reticence that preceded it.

I usually try not to view new releases too far within the context of the artist(s)’ discography, but since Pedestrian Deposit has a body of work that means so much to me, and because of how excited I was to observe this profound maturation in their output, I thought it would be appropriate in this instance.