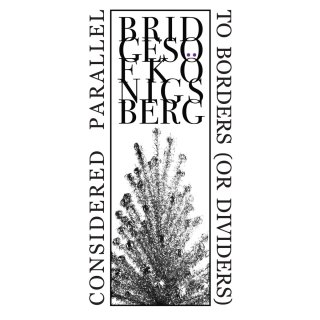 The first five or so minutes of “The Greatest Awful,” which opens the set of six extended tracks that comprise Considered Parallel to Borders (Or Dividers), is an immediately unsettling dada collage that acts as a fitting tone-setter for the remainder of the album. Recordings of smacking and gurgling mouth sounds; erratic, percussive spasms of distortion; mangled synthesizers; and countless layers of shifting, contorting noise coagulate into something both frightening and enthralling, trapping the unwitting listener in its knotted claws. But Bridges of Königsberg, a trio composed of Christopher Burns, David Collins, and Peter J. Woods, don’t seem to have the goal of making the most disturbing sounds possible, even though it’s often accomplished anyway. They’re more concerned with the interactions between elements: how the cracked, broken techno loops give structure and rhythm to much less compliant noises, how tension-filled drones can slowly force things into a new direction, how bulbous pulses amidst waves of static and fuzzed-out recordings can sound like some sort of terrifying monster forcing its way out of a pit of tar. Considered Parallel to Borders is certainly a harrowing record, but even though its sonic explorations are as angular and jarringly contrastive as the sharp black lines on its cover, the images and atmospheres it evokes are spell-bindingly lush.