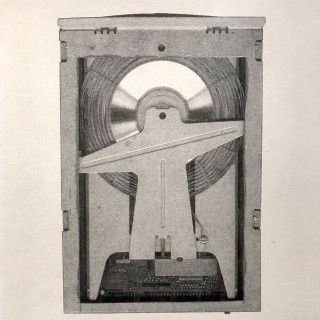 This is another release that took me a while to both get my hands on and fully process (pun intended). Constant Linear Velocity is a recording of British sound artist Stephen Cornford’s ambitious installation of the same name, which has since been lost in transit. In line with the defiance of waste permanence that is central to Consumer Waste’s philosophy as a label, the sculpture consisted of hundreds of repurposed computer shells and DVD drives, constantly being rearranged into new iterations for each presentation. At play in the work’s sonic profile are the distinctive hums, clicks, buzzes, crackles, and glitches of an intimate digital landscape, the sounds of the mechanisms once hidden behind the functions they were designed to perform now fully deconstructed and brought to the forefront. In the booklet included with the CD, Danae Stefanou identifies Constant Linear Velocity as a formidable entity, both in its physical and auditory forms: “Its sounds denoted another, more fragile and transient layer of presence. This assemblage of disused equipment emitted a complex and unsettling pulsation: long stretches of stillness interrupted by moments of increasingly erratic density. CD trays sticking out and quietly retreating; like exhausted mechanical tongues, in anticipation of an ever-suspended finish line.” On their own, the sounds of the installation are fascinating and immersive; when thought of in relation to their tangible source, they become a hulking testament to the endless mountains of electronic waste that we are producing every day, a forgotten byproduct of humanity that is anything but silent.