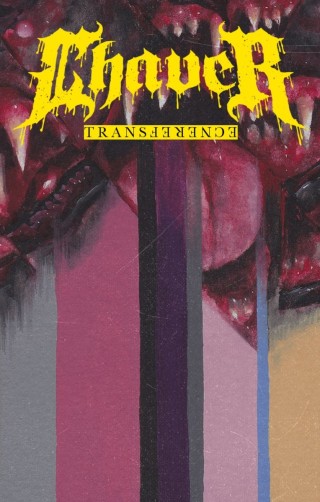 I wouldn’t describe Transference as metallic just because of its chugging thrash-worship grooves and raw, vicious attitude, but also because the instruments themselves actually sound like they’re made of metal, all sharp junkyard edges and scraping rust as these ten concise tracks tear across the landscape. German trio Chaver’s sound draws from a variety of sources and influences, but at its heart are the rolling bass throbs and crash hits that are the backbone of tracks like “Ultimate Abuse”; this album is all about the breakdowns. The way the band builds anticipation for these cathartic blasts of chugging rhythm is varied and unpredictable. “Disinclined,” whose first half is a fast, fiery d-beat gallop, falls after a brief respite into a deliberate, halftime lead-in groove that provides a perfect link to the slower-paced thuds that conclude the track; “A Tool” draws its magnetism from metronomic, almost rap-like vocal delivery; and the headbanging unison hits of “Efficiency” require no further elucidation. Aside from the repose offered by “Feckless,” a small interlude between the album’s two halves, Transference is a nonstop barrage of punishing hardcore, and though the definite highlights are the slamming breakdowns there isn’t a single wasted moment.

Transference was originally released as an LP by Injustice Records earlier this year.