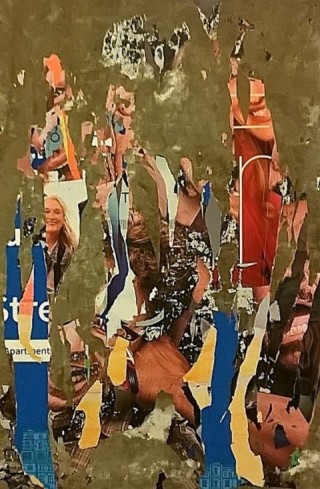 As members of Reynols and Volcano the Bear, respectively, Alan Courtis and Aaron Moore are no stranger to outsider music. Throughout each musician’s career with those bands, their solo work, and a host of other collaborative endeavors (Dragon or Emperor, Guignol, Mutantea, Textile Orchestra, the list goes on), they’ve examined and worked with countless unusual sound sources, techniques, and performance settings. 2283 is their fifth release from the pair’s ongoing duo project, almost entirely recorded during a brief meeting at Moore’s apartment in New York, and sees the two artists both composing and improvising with toy instruments, primitive electronics, percussion novelties, and their own voices. It’s a bizarre and magnetic amalgam of minimalist free music and occult folk headspace, with each track falling somewhere between either end of that strange spectrum. The A side is quite reserved, the soft clatters, rattles, and rings swathed in a cloak of heavy silence; the space of Moore’s residence is a significant addition to the music, and through its lens the duo’s odd sonic interactions are even more elusive. The following side is more eclectic, with the almost pretty fingerpicked guitar and muttered vocal gravel of “347” and tribal ambience of “296” evoking my favorite Volcano the Bear moments, and though the final two tracks were produced by Courtis using overdubs there’s no drastic shift in presence that reduces or overshadows the impact of what came before.