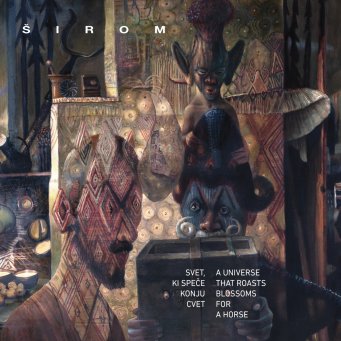 The title of Širom’s newest album, A Universe That Roasts Blossoms for a Horse, manages to out-weird that of their previous, 2017’s I Can Be a Clay Snapper, but the music itself adopts the opposite trajectory. The elements of chaotic jazz and freely improvised music that lurked beneath the meditative folk compositions of Clay Snapper are largely abandoned here, making room for intricate, minimalism-indebted repetitions that unfold beautifully. I don’t know anything about Slovenian folk music, but although it’s clear that the creations that comprise A Universe… are anything but traditional, that feeling of community and wordless conversation that is so inherent to folk is present here in spades. Despite the stylistic evolution from its predecessor, the two records are inexorably linked by the vocalizations that conclude …Clay Snapper on “Ten Words” and begin A Universe… on “A Washed Out Boy Taking Fossils from a Frog Sack.” Listening to the two back to back is something I haven’t yet done, but may give rise to some interesting connections, though as the unparalleled magic of “Sleight of Hand with a Melting Key” begins I’m hard pressed to turn my attention to anything else. Each of the lengthy pieces were carefully planned and recorded without overdubs, something that’s not hard to discern from how organic and immediate the album sounds, but it’s staggeringly impressive when you hear how detailed the arrangements are. “Sleight of Hand with a Melting Key” progresses through several movements throughout its 15-plus minutes, evolving from sublime, In C-esque melodic cells to stretches of unaccompanied percussion, meditative drones, and propulsive guitar strumming. The complexity escalates even further with the dense drum polyrhythms and string interplay of “A Pulse Expels Its Brothers and Sisters,” the involved vocal arrangements that slither throughout “Low Probability of a Hug,” and the almost unbearably tense bowed drones of “Same as the One She Hardly Remembered.” A Universe That Roasts Blossoms for a Horse is a truly awe-inspiring work of art, one that showcases both the amazing skill of each member and the result when they all come together.

There’s a sequence in Memoryscapes, a lovely short film, in which Širom set about fashioning music from a pile of pots, pans, saucepan lids and empty cans of supermarket lager on the kitchen table. It’s the band in microcosm: cracked, insistent beats, rhythm chasing rhythm, a deadly serious playfulness, and the intimacy of close friendship undercut by the sense of emergency of a flashing torch. Širom are all about the head and the hand, and the dark that always pushes against the light.