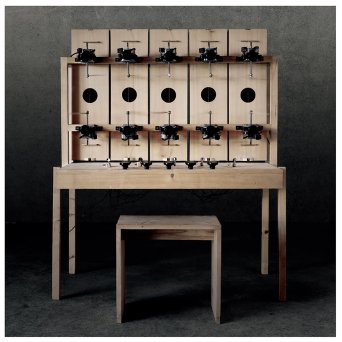 Few works rival the primordial sonic meditations of pioneering, hypnotically minimal drone compositions, such as Eliane Radigue’s monolithic Trilogie de la Mort, Pauline Oliveros’s Accordion and Voice, or Folke Rabe’s What??, whose simple but radiant exhalation I often describe as “the sound of a small leak in the wall of heaven.” For the first few minutes of Ventorgano, the newest release from Austrian composer Andreas Trobollowitsch (following some fascinating installations and 2016’s brilliant Roha), that same feeling of soothing, almost celestial calm is achieved. But the synthesizer Trobollowitsch used to create this piece isn’t designed to keep with such reticence for long; the titular device, built by the artist himself, “consists of guitar strings, wooden resonating bodies and converted fans which use cello-bow hair instead of propellers to set the strings into oscillation. Rotating speed, string tension and attack can be adjusted progressively, allowing the player to control micro rhythmical elements and subtle changes in the overtone spectrum.” Unsurprisingly, the music that unfolds has a very physical presence, slowly increasing in complexity as it expands outward from humble origins. And the sounds of the Ventorgano are not the menacing clanks of an industrial machine. They’re pensive, lush, even comfortingly organic at times, and the otherworldly headspace such a special instrument creates is truly something to behold. Trobollowitsch’s wondrous creations do evoke the work of the aforementioned artists, but the immersive polyrhythms and overtones conjure something even more mystical.