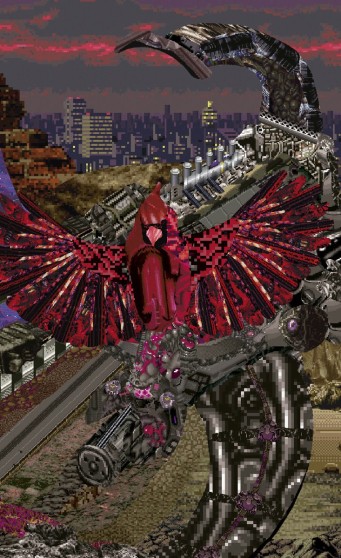 Most of the tapes released by Chicago imprint Hausu Mountain, from the garish, color-clashing 16-bit cover designs to the frenetic electronic hodgepodges of the music, can reliably be described as “overwhelming.” All three of uncompromising artist Bonnie Baxter’s solo albums (she also performs and records with fellow Brooklyn noisemakers Hisham Bharoocha and Nicos Kennedy as Kill Alters) have been put out on HM, and all three fit that description of “overwhelming,” but AXIS especially is unlike anything you—or at least I—have heard before. The short release is structured around Baxter’s singular vocalizations, which pounce from animalistic chattering and gibbering (sounds which, as recurring elements in the strange, fluid current of “Nocturnal Emissions,” are strangely hypnotic) to angry, raving, eerily cut-up rejections of sexual advances (“No DICC”) faster than you can say “what the fuck is happening.” AXIS lurks behind many less grotesque guises throughout its modest duration—elastic and intricate EDM, plasticky synthpop, punishing power-noise—but at its heart is the bizarre energy that Baxter’s unhinged vocal performance introduces. Equal parts repulsive and mesmerizing, her nonsensical ad-libs and surreal ruminations help make AXIS a true “Spirit Enema.”

“I need some fucking help with my asshole so please take me to the fucking doctor thank you very very much.”