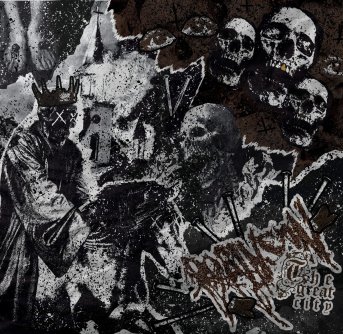 The Great City, originally released 2006 on Debello Recordings, is an essential record to fans of extreme and deranged technical metallic hardcore, along with other landmark releases such as Daughters’ Canada Songs, See You Next Tuesday’s Parasite, Hayworth’s I Hope the Thunder and Lightning Kill You, etc.—there’s no shortage of this stuff so feel free to reach out if you’re interested in further recommendations. Though Robinson (who hailed from my own home state of Ohio) broke up in or around 2006 after just a few sporadically released demo and this, their only official studio LP, the eviscerating guitar work and wraithlike shrieks reverberate long past that. Through the admirable efforts of Chicago imprint Wax Vessel, who have also worked to revive other timeless classics—so far they’ve rereleased Cuddlemonster (o.r. 2004), The Dead Sleep Like Us for a Reason (o.r. 2006), and The Stars Outnumber the Dead (o.r. 2007)—complete with reimagined cover art and ambitious color variant selections with the help of Zegema Beach distribution, The Great City has been brought to a modern audience with all of the glory it deserves. After listening to a low-quality VBR rip for God knows how many years, this faithful extraction from the original master tapes sounds amazing; every breathless blast beat, every throat-ravaging scream, every infernal chug cuts through with terrifying viciousness. All of the iconic moments I anxiously await each listen sound incredible: the stuttering triplet fill that begins part II of “The Great City of Salvation,” the bone-crushing return of the sludge riff at the end of part III of “The Great City of Ruin”…. You should’ve seen me, I was grinning like an idiot the whole time.