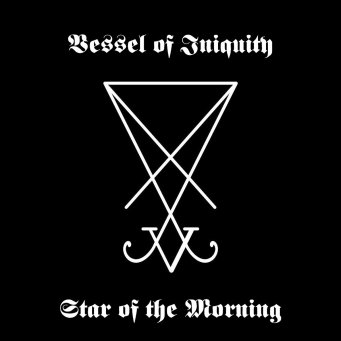 So what are the chances that I mention Vessel of Iniquity (the solo moniker of multi-instrumentalist A. White) in a review of similar-spirited music and then the day after discover they’ve released a new album? They seem pretty slim, but who cares—because it happened. Hot on the heels of the Void of Infinite Horror LP released earlier this year on Sentient Ruin (which was a hair’s breadth away from appearing on my midyear top ten list) and the self-released Conjuration of the Fire God last month, Star of the Morning continues with more of the project’s harrowing descents into shadow and caverns of nocturnal terror, auspiciously opening with the ritualistic percussive buildup of “Maledictum” before the blast beats first appear in “Deo Non Estis.” The expectedly formidable, atmospheric maelstrom of guitar and keyboard is less clean this time around, the densely packed layers instead plagued with rot and oppressive lo-fi smog. “Stella Matutinam,” despite it translating to the album’s somewhat optimistic-sounding title “star of the morning,” is definitely one of White’s most disturbing tracks yet, plowing through a shroud of consuming darkness with propulsive, thundering programmed drums whose unpredictable rhythms both temper and contribute to the chaos. The drum machine isn’t anything new for the project, and I usually don’t welcome such a choice of instrumentation in this sort of music, but once again White proves his mettle at making the synthetic rhythm section sound anything but, imbuing the crashing cymbal cacophonies with razor sharp bite and the pummeling double bass stampedes with bone-crushing weight. White’s agonized shrieks are also in top form here, tearing up from the pit of despair and melding with the tumult of pitch-black distortion. With a strong finish in the form of the extended nightmarish havoc of “Descende,” Star of the Morning is yet another excellent release from Vessel of Iniquity.