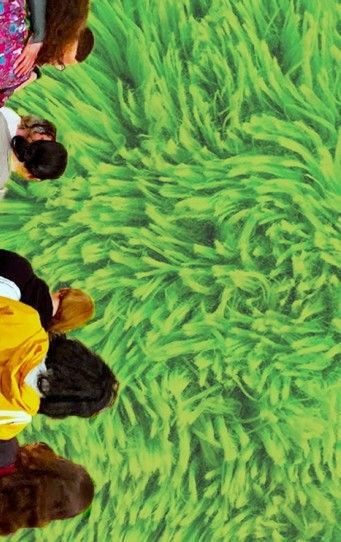 It’s a pretty unique occurrence for me to have written about three releases from the same label in the span of a month, but at the same time it should come as no surprise in the case of Lurker Bias. From freely improvised music and avant-garde jazz to some of the most exciting releases in contemporary wall noise, the Chicago-based tape label never ceases in constructing its ridiculously eclectic catalog. The latest in a run of particularly fascinating endeavors for LB, Human Flourishing’s new cassette Cmon Human is a vivid, enrapturing coalescence of intimate bedroom pop tropes, ersatz electronica, and a host of other unidentifiable flavors. From what I can tell, this is the first full length from the Connecticut duo (there are some shorter self-released albums on their Bandcamp page), but already they seem to have carved out a dimension of musical abstraction not unlike the soupy rock detritus of Triple Negative or the fragmented collage-pop of sneeze awfull. In a series of fluid, colorful cascades as familiar and wholesome as that patch of green shag on the cover, Human Flourishing reverently guides us on a journey through languid instrumental meanderings, saccharine synth ambience, homey found sound, and even some soulful vocals that at every moment exudes a calming domestic tranquility. It’s so easy get lost in these soft layers of warmth and beauty. Maybe secure yourself to reality with a rope or something though, because it’s not so easy to find your way back—or to even want to do so.