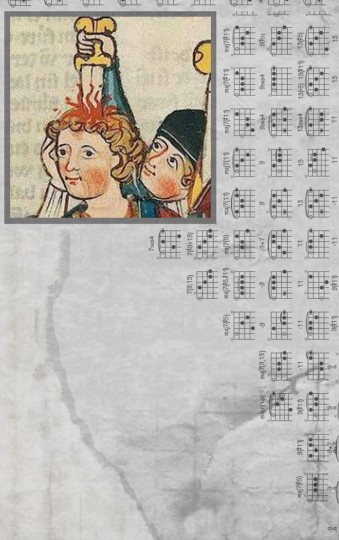 The Middle Ages was a strange time for a great deal of reasons, not the least of which is the bizarre medical theories and practices that were used. Leech treatments, bloodletting, trepanation, astrology-based anatomy, and who knows what else are all pretty horrifying, but what always unsettled me the most was the idea of the four humors (blood, black bile, yellow bile, and phlegm) that must be kept in balance in order for an individual to be healthy. Such a spectacularly incorrect and misguided conception about the human body makes me uneasy, but admittedly also a bit intrigued. Composer and bandleader Alex Maerbach might have had a similar reaction when he was inspired to create Will the Low E Still Be There Once You’ve Come Down?, a self-described “rumination on the IV humors, medieval pseudoscience, alchemy [and] gnosticism.” The music on this C60 is just as unusual as the cover design, and seems to function, structurally, in a similar way as well; skulking drones and drifting fuzz occupy grayish liminal spaces before more conventional stretches of instrumentation materialize, the arrangements sounding somewhere between composition and improvisation as a drum set, double bass, accordion, singing saw, and brass cascade and careen off each other. The acoustic formations on “Melancholic” sound medieval enough, but “Sanguine” leaves the feudal folk behind in favor of heavens-reaching, atmospheric post-rock jams. The latter track just sort of… dissolves into a gossamer drift, languid clouds of space dust that linger until a soothing recording of waves ushers in some whimsical, yet slightly somber string plucks, led by the haunting hollow of a mandolin (most likely played by Maerbach himself). The monstrous final track “Choleric + Phlegmatic” ambles on a cosmic scale, its threads of rock music submerged within a dense smog of nebulae, but the electric currents are once again tempered by the arrival of a devotional folk reprieve—that in turn gives way to meandering electronic detritus. By summarizing these long, patient tracks I make it sound like the transitions are whiplash-inducing, but the exact opposite is true; nothing throughout Low E is rushed or unpleasant. It’s perfect calming music for the undesirable situation of having your cranium viciously stabbed by a dagger.