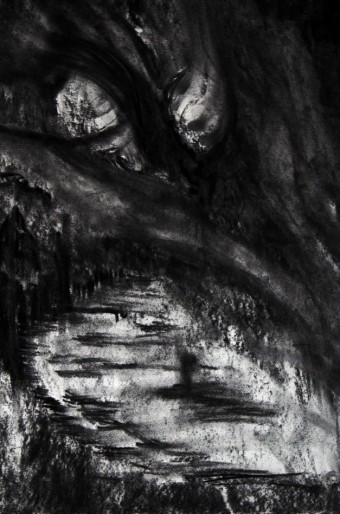 When a black metal album starts out with an extended, subdued stretch of atmosphere-building, I can hardly ever shake the fear that it’s not going to go anywhere. That thought didn’t even enter my mind upon my first listen of “Den of Fossils,” the opening track of Odoacer’s debut release There the Vultures Will Gather. Even though its full intensity doesn’t kick in until about halfway through its nearly seven-minute run time, the sense that something big is about to happen is never absent; the minimal guitars subtly crescendo between climbing repetitions, and moments of silent rest only cause more agonizing tension to amass before suddenly, gloriously, we are thrown into a dense nocturnal maelstrom. “Dirge Unto Nemesis” is the first of two 16-minute tracks that comprise the meat of the tape, and is one of the first songs in a while to which I feel comfortable applying the descriptor “cinematic”; after nearly eight minutes of sludgy, hypnotic, mid-paced plod the rug’s pulled out and once again only a solitary distorted guitar remains, intertwining with a barely intelligible but still quite harrowing spoken word sample until the sky crackles with apocalyptic electricity and the cathartic waves of pounding drums and lushly smeared tremolo chords return. This climactic coda features some of the album’s strongest vocal performances, and also made me realize that I don’t think there’s a single blast beat in the entirety of “Dirge Unto Nemesis”—just goes to show you how much else it has to offer for me, who is probably the closest to being a human blast beat if there were ever such a thing, to enjoy it so much. “Left Only with Your Grief Amongst Carrion” has us covered, though, only waiting about 30 seconds before rocketing into loud, dissonant, labyrinthine guitar work with vicious snare at a breakneck pace. I don’t think the production job on this could have been any better; it’s loud and clear but still plenty dark and dirty, full-bodied enough to sufficiently bolster the anthemic moments yet rough-edged enough to render the stretches of high-speed riffs even more blurred and cacophonous. Finishing off with the epic closer “Cyclops,” There the Vultures Will Gather cements itself as one of the best debuts I’ve ever heard in this genre.