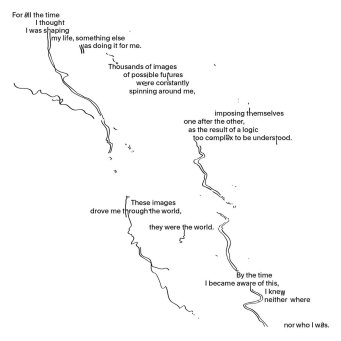 I don’t think I’ve ever mentioned it here before, but among other mental health issues I intermittently struggle with something generally referred to as DP/DR: depersonalization/derealization disorder. In my case my symptoms largely take the form of the latter; I am bombarded with intrusive thoughts that convince me of a deep, desolate solipsism, a reality that is simply the product of my void-confined immortal consciousness keeping itself occupied. It’s hard to accurately describe to others how terrifying and utterly isolating it is, but one way I try to convey what I feel is through the channeling or sharing of creative works that capture such existential bleakness (Perec’s A Void, Hertzfeldt’s It’s Such a Beautiful Day, Beckett’s later novels, and Kaufman’s new adaptation of I’m Thinking of Ending Things are all semi-recent examples). With its introductory statement that it actualizes “the memories and thoughts of a creature living in a world in which the distinction between reality and simulation, as well as between psychic space and external environment seems to have definitely collapsed,” sound artist Marco Paltrinieri’s new release The Weaver seems to fit the bill. I also feel an unsettling connection to some of the phrases featured on the sparse cover art, notably “the result of a logic too complex to understand.” But I made it through most of this six-part odyssey with hardly any chilling splashes of anxiety or thought spirals, because much of The Weaver reminds us, both explicitly and implicitly, that a consciousness subjected to such circumstances need not lament upon self-awareness. “There is no inside or outside here,” the soothing voice reveals as reverberating tones spill into a warm emptiness; “everything seems within reach, in the eternal attempt to define a perfect present.” Unfortunately, the conclusion of the album is not exactly an uplifting one. The two-part “The Other Body” spins a harrowing threadwork of flitting glitches, gutted speech, paranoid whispers, and dread-filled rumble as the speaker descends deeper into doubt and despair. Part II especially really got to me; download the lyrics here and you’ll see what I mean. With superb, immersive sound design and a concept that hits way too close to home, The Weaver will most likely haunt me forever.