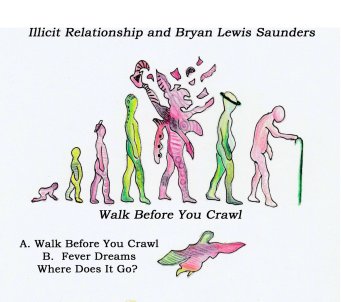 Though Illicit Relationship was an unknown name to me when I came across Walk Before You Crawl, I was already somewhat familiar with Bryan Lewis Saunders, the avant-garde multimedia artist who, among other bizarre and both physically and emotionally taxing projects, is well known for composing a self-portrait every day of his life, including a stretch of 11 days in 2001 during which he consumed a new psychoactive substance every 24 hours to examine their effects on his art. Nearly two decades later, he’s apparently still truckin’, here collaborating with the Houston duo (composed of Austin Cooley and Carol Sandin Cooley) on the A side of this LP via “dreamspeak,” i.e., half-nonsensical mutters, mumbles, musings, etc. that serve as both textural and directly meaningful elements. The way this unfolds—as Saunders’ stream of partially formed thoughts and constant trail-offs swirls into a hallucinatory sludge of additional vocal contributions by Sandin Cooley, assorted birdsong, tense electronic hum, feedback, and various effects—reminds me of the somnambulistic delirium of releases like Automatic Writing or the much more recent Undercovers. It hovers somewhere in that general no-man’s-land between intelligibility and gibberish, yes, but “Walk Before You Crawl” does so in a manner that allows voice, even mostly-decipherable speech, to exist as something much more abstract, gestural, and psychedelic. This continues with the two pieces that comprise side B, “Fever Dreams” and “Where Does It Go?,” both slopping layers of answering machine messages, monstrous growls, screeching industrial squall, absent-minded thinking aloud, and slurred swathes of dusty slime onto a slow-spinning lathe of groan and gloom.