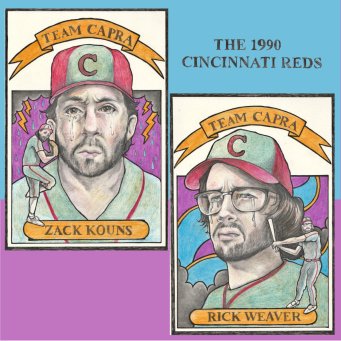 I have a strange relationship with baseball. I played for a few little league teams when I was a wee lad, I’m always up to play some catch, and I will probably go to a few more games before my inevitable death. But overall I see baseball as something deeply wrapped in nostalgia, both my own and that of the collective United States (it is “America’s Pastime,” after all), and in my mind it’s become an institution that I am more just grateful exists at all rather than one that resonates much with me personally. A large part of that gratitude comes from the staggering range of art that baseball and its singular sentimentality—”Pafko at the Wall,” The Universal Baseball Association, Inc., J. Henry Waugh, Prop., The Sandlot, that legendary scene in High School Musical 2—something that has been present my whole life growing up in Cincinnati. The Reds seem to hold an even more fervent intensity of reminiscence than many teams, and among all sorts of people. Zack Kouns and Rick Weaver team up once again on The 1990 Cincinnati Reds to pay their own brand of homage to one of the two legendary seasons in Reds history (the first was in 1900, as you’ll learn in opening track “Billy Hatcher”). This is no faithful historical reenactment or revival; the pair of Tennessee weirdos instead embark on an irreverent, surreal reimagining of these people and their lives, an approach that could conceivably be seen as disrespectful and yet just… isn’t. It’s similar to what Barthelme did with Robert Kennedy, I think, and I’m sure there are more examples that aren’t coming to mind at the moment. Kouns contributes the spoken aspects of the album, which tell tales of death, the cosmic, the supernatural, “a young Colombian girl with six arms to crush the heads of the wild and wicked and the pure-hearted alike” (who is none other than Mariano Duncan)… it’s quite the adventure. Weaver, who I learned of through his band Form a Log, builds intricate, hallucinatory rhythmic backing for Kouns’ often unrelenting deadpan delivery, plasticky drum patches and sheeny synths and quirky electronic burbles that make this phantasmagoric album even more of a compelling curiosity. The 1990 Cincinnati Reds is not nearly as (properly) educational as one might expect, but it will probably still teach you a lot of things—things you may not want to know, perhaps, but willful ignorance has never helped anyone.

“This one belongs to the Reds.”