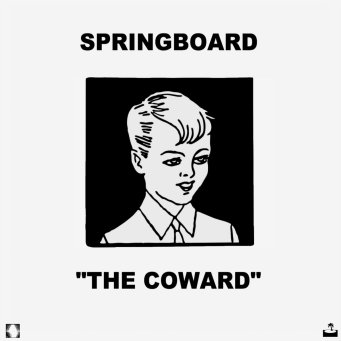 The newest installment in a recent string of excellent releases from mysterious Chicago imprint/collective Neutral Archive, “The Coward” is one of the finer and more engrossing examples of auditory bricolage I have encountered in a long time. I haven’t heard any other material from Joe Cavaliere’s Springboard project, but it’s difficult to imagine anything topping this half-hour opus of “tapes, screams, folly, kit, [and] loops” mashed into an engrossing pulpy paste. Stumbling through variegated vignettes with the grace and poise of a six-legged elephant on roller skates, Cavaliere’s imperfect assemblages proudly display their sloppily stitched seams and jagged overlaps like a child showing off a particularly gruesome injury to their wide-eyed friends, and I find myself paying as much attention to the flaccid superfluity of the sounds as I do to the sounds themselves. The A side could be described as a hazier, drugged-out heir to the vicious volatility of Chlorgeschlecht’s Unyoga, throwing everything from shrill, maniacal human delirium (shrieks, moans, chatter) to what resembles a violent mass extinction event occurring solely within the walls of a sweaty arcade into the thrift-store-bought plastic mixing bowl that is almost certainly not rated for this high of a temperature. “The Coward” intermittently evokes the oxymoronic sensations of time standing still and moving impossibly fast, especially over the course of the subsequent side, which lumbers along with fat flailing limbs of cheap electronics and junk-drum spasms, sort of like if you loaded recordings of every subpar noise set you’ve ever witnessed into a poorly programmed generative AI interface and then shamelessly plagiarized the output—and yes, that is praise; if you don’t believe me, just listen. I cannot seem to get enough of this release, whose intentional obscurities and bullheadedness make it all the more accessible and intelligent.