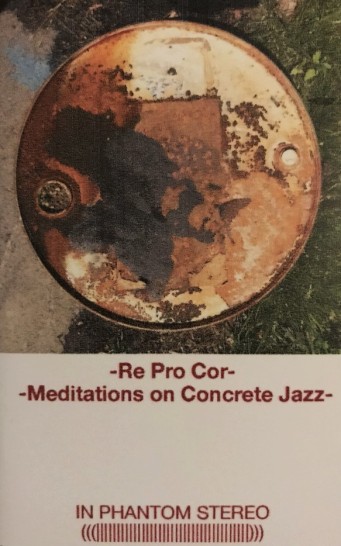 Ambient music—the kind I enjoy, at least—often augments harmonic and/or melodic elements with complimentary externalities, most often field or domestic recordings, that lend an additional layer of intrigue for whatever notes, textures, or mixture of both is occurring. Fascinatingly, Meditations on Concrete Jazz is the exact opposite: a docile outdoor environment is the primary feature of this hour-long, two-part suite, and it is the intrusions by the performer, both conventional and abstract, that act as complements. Even more interesting is the strange panning that occurs “at random,” bizarrely inserted by intermittent malfunctions of the cheap mono-only Radio Shack tape recorder being used. Though the A side immediately lulls and beckons with organic serenity that has just the right amount of less cozy, but no less appealing qualities (pointed stagnancy, ambiguity, evasiveness), it isn’t until around six minutes in that the beauty this modest setup has the potential to create truly takes off in the form of scuzzy, no-fi synth wash—somewhere between a peephole to heaven and a soft amber light at the end of an old soot-choked city street—anchoring the center channel while the familiar sound of distant birdsong flits in the far left. This moment is a perfect example of the aforementioned sonic role reversal; it’s less that the synth is the true focus and more like it’s graciously given the stage for a few moments with nature, the actual backbone, watching fondly. It’s rivaled on the less musical side, however, by a transcendent trio of tape hiss, trains, and tapped metal on side B, one of many blurred-edge episodes that make this tape’s sixty-two minutes feel like half that at most. It’s finally been warm enough lately for me to spend extended periods of time outside, so I couldn’t have discovered Meditations on Concrete Jazz at a better time.