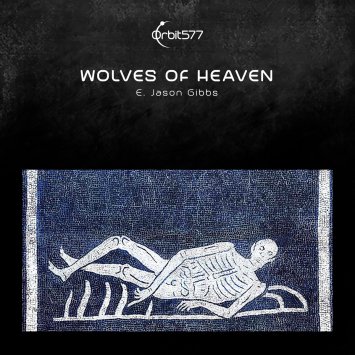 Though surely few predicted as much at the time (as Owen Maercks puts it, “if you had asked me 40 years ago… I would have laughed in your face”), the peerless legacy of Derek Bailey lives on piecemeal in those who find inspiration in his techniques. Sometimes this influence is nestled so deep within the essence of an artist’s music or playing style that it’s difficult to identify at first, and other times it’s so prominent that immediate comparison is inevitable. Guitarist and cellist E. Jason Gibbs’ new Wolves of Heaven CD is kind of both. His agile, gestural use of dissonant harmonics, string rattle, and atonal percussive strikes instantly evoke those of the late legend, but there’s something about Gibbs’ approach that evokes something a bit more homey and folkish. Both the track titles and the music itself imply a reverent earthiness; on cuts named “Raven and Coyote Celebrate Their Good Fortune” and “Wet Rocks and Roots” he’s situated within a clear and palpable organic environment, even though the presence of ambient noise mostly acts as more of an accompaniment than the other side of an improvisational interaction. When I said the Bailey connection was both obvious and subtle I meant that it took me much longer to realize why Wolves of Heaven resonates with me more than most abstract guitar material of similar character: with Gibbs’ breath, surroundings, and bodily movements all captured alongside the foregrounded picks and plucks, he harnesses the same exhilarating physicality that makes records like Music and Dance and Aida so memorable. For all of its primitivist sensibilities and grasps at some semblance of convention, Wolves of Heaven is an addictingly odd outing that demands full attention.