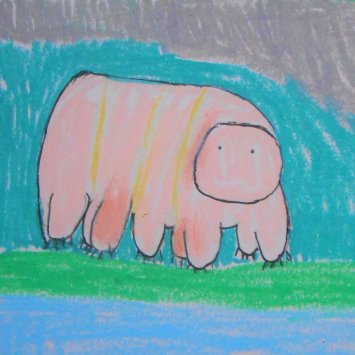 Many years ago I discovered and listened to Windswept Trees & Houses, the first compilation by the Jewelled Antler Collective, and since then life has never been the same. Through the wide-eyed, wonder-filled woodland warble of bands like The Family Apostolic, Thuja, and The Knit Separates I gained a new appreciation for nature that far surpassed the simple acknowledgement I’d always held; the outdoors became not just a place to be but a place in which to do, to make and collect and listen. noemienours hails from Stockholm, many miles from the JAC’s home base of the sun-drenched west coast (although Kemialliset Ystävät were featured on Heat & Birds, the follow-up to Windswept Trees), but the sublime, artfully naïve reverence of these “all-ages bear-saving non-ideological vegan drug-free home-recorded lullabies from the forests of Sweden” gives me that same childlike burn for adventure, possibility, and harmonization. Carefully laid to tape using an 8-track reel-to-reel, the delicate meanderings that comprise Tardigrade Bouncing are speckled with the dusty brightness of tape hiss; clean, plucky electric guitar; and gentle, often barely audible percussive backing that imbues many of the tracks with motion simultaneously driving and lethargic. But while these soft serenades bolstered by noemienours’ haunting vocals and sparse, elegant piano are sunny enough to make you smile, they also hold a deeply elegiac current that only reveals itself upon repeated listens. This artist has a profound love for living things of all forms, and any such empath has plenty to lament in the twisted world we’ve built—we’re quite lucky that they chose such an unforgettably gorgeous way to do so.