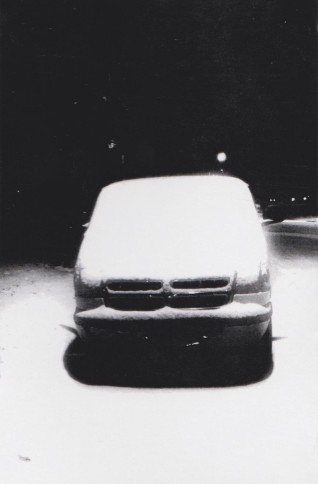 Getting to see Ohio-based improvisational collective KBD last week was a treat. Though performances and recordings most often consist of Michael Kimaid’s drums and electronics and Gabriel Beam’s modular synthesizer, that night they were joined by Ryan Dohm on trumpet and electronics. KBD takes a do-it-yourself, less formal approach to the spacious, sometimes noisy electroacoustic improvisation style pioneered by groups like AMM, Morphogenesis, and Gruppo d’Improvvisazione Nuova Consonanza, with some pieces even approaching the former’s ideas of “meta-music.” Idyll, a tour c40 that features Kimaid and Beam, presents fluid instrumental conversations between the experienced collaborators and, like many other albums, demonstrates the power and possibilities of the drum and synth combo. Beam takes the lead most times, his patching resulting in percussive oscillations and almost gunfire-like chatter, and the versatile synthesizer provides a sustained atmosphere with dynamic textural interjections. Kimaid’s playing is more subtle but no less rich, with the softly tapped drums and droning loops flitting between foreground and background. I couldn’t help but smile at the voices heard near the end of side B; whether from an actual radio or not I’m heavily reminded of Keith Rowe (whose biography was featured in the background of a picture showing these very tapes).