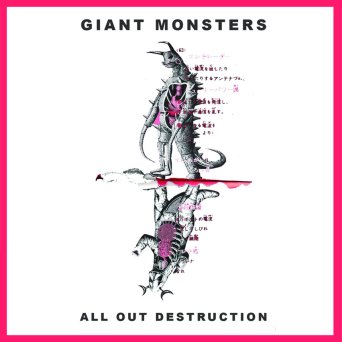 Giant Monsters is a newly formed project consisting of accomplished noise artists Roger H. Smith (Chefkirk) and Paul Dever/DVR (Griz+zlor), a dual-manned machine of unrelenting noise generation that worships both high volume and kaiju, the massive sci-fi heavyweights of classic Japanese cinema. On All Out Destruction, Giant Monsters’ debut release, the dense battlegrounds of abrasive sonic waste that the duo carves out largely reside on the more digital side of things, thick layers of sharp static and caustic distortion rather than meaty pedal manipulation and screeching microphone feedback, but none of the visceral aggression that comes so naturally with the latter technique is sacrificed; after a very brief introduction of disjointed electronic wreckage and various bite-sized crunch/bleep episodes, the punishing initial punch of “II” is there to scorch the Earth. These tracks are great because they seem to progress with even less dynamism than standard longform “wallish” harsh noise, electing instead to make use of a more contemporary approach to compositional stagnancy, with persistent textural currents offering consistent presences in each of the three longer pieces. Another great thing that happens on All Out Destruction is that over the course of the tracks, especially on “III,” the threshold of extremity often seems to move instantaneously like a function approaching its asymptote: near the eight-minute mark, what were once just high-pitched frequencies amidst the mass of chaos become hypnotic rhythmic slices, pinched like the noise a CRT makes when you turn it off. Gradualness is the game in the case of “IV,” however; the track starts off unassumingly enough and becomes a screeching, flailing beast of noise by the end. A superb and sufficiently brainy release for the new age.