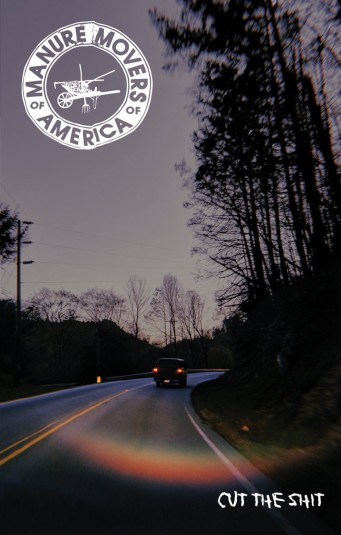 Manure Movers of of America (yes, that’s correct, there are really two of’s) was one of those bands that you immediately really like but can’t explicitly put your finger on why. After receiving their Already Dead debut Cassette Tape #2 as a surprise addition to my preorder of DC_33.33’s Vela Abridge, I instantly fell in love with their unique brand of stuffy clouds of psychedelic noise and distorted loops. There’s not a ton to the music, per se; it’s all about the atmosphere, the strange presence its dirty gossamer form adopts, the hazy, confusing headspace of ambiguity, tension, and warmth all rolled into one almost homogeneous blob. Less than a year later, the mysterious Montana project continue their fascination with excrement on Cut the Shit, which features memorably named cuts like the title track along with “Don’t Think Twice, It’s All Shit.” Along with my recent re-listen of Tape #2, the Movers have fittingly provided a lovely soundtrack to my lazy, piecemeal move-in process, giving name to the nameless comforts and curiosities that lurk in lethargy—”Gift Horse” amplifies the imperceptible, neutral energy that hides in an unfurnished new living room, “Hardly Workin'” blends seamlessly with the queasy mundanity of a rainy afternoon outside my windows, “Cut the Shit” threatens the arrival of an ominous darkness. Bedtime already?

One thought on “Review: Manure Movers of of America – Cut the Shit (Already Dead, Jul 31)”