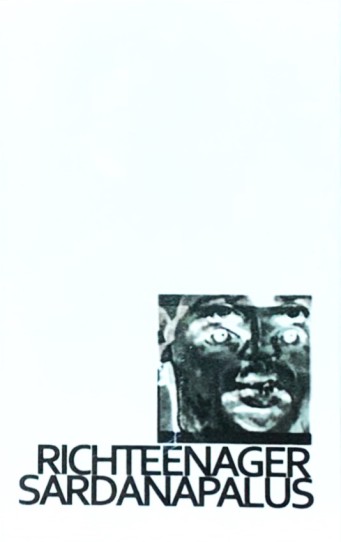 I’ve been a middle-class teenager my whole life, but oh how I dream of one day becoming a rich teenager: even more privilege and less accountability than I already have, parents who don’t give two shits about me, my very own sports car to drunk-drive at top speed through the side of an orphanage and shrewd lawyer to get off scot-free. On Sardanapalus, the self-proclaimed Rich Teenager makes a convincing case for the enlightened paradise that is their existence with a fruitful offering of completely useless, utterly unengaging sounds—because at the heart of the fleeting, saccharine “happiness” of great wealth is a yawning emptiness only temporarily filled by the joy of new consumer appliances, vehicles, or tax breaks. After the miniature UFO chorus of “Topsite Theme,” a nearly 20-minute reverie of sonic castoffs and leftovers takes shape in the meandering title track, constant churning tape static stripped of its meaningful contents and microscopic shreds of electronica blending with a distant warbling whine to produce a piece that is intensely engrossing in its unyielding ennui-scape. The following “E.E.O.” feels like a clump of junk of a different sort, much louder and more active, yet retains the strange subversive quirks that make this tape what it is: uncompromising repetition, unexpected deconstructions, a general disregard for appeal of any kind. “Jazz Entre Amigos” unfolds like a recording of a chaotic fire drill in a large office building played backwards, “Tushy&” like a troubled robot having a very public breakdown (along with an ending sample both hilarious and unsettling), “This Eminence of Guilt” like someone just stuck their grubby hand into the innards of a Casio and mercilessly groped around. As you can probably see, the fanfare of the rich teenager is the highest form of music, effortlessly towering above the so-called “notes” and “rhythm” of the commoners and even the self-congratulatory bourgeois avant-garde. Sorry peasant; don’t talk to me until you’ve evolved.